I wanted to experience a true and authentic European Christmas Market.  I didn’t want to see tacky plastic novelty iPhone cases and thankfully this market was perfect!

We arrived on the Friday night which was too late for the market as it had closed.  We did however find an absolute gem of a little hip burger bar called Jamy’s!  OK, OK, I know what you are thinking….But we were hungry and needed food.  The market was closed so Jamy’s looked appealing.  It was great value too, a couple of burger meals including drinks was €18.

We grabbed an early night ensuring we’d have a full on day/night in Franfurt.  We woke up to pristine blue skies with crisp white frost on the car roofs.  After getting wrapped up we headed out in the heart of Frankfurt leaving behind the MK hotel Frankfurt.  It was a good hotel and the location was the reason why we chose this one.  A short 10 minute walk is all that it took to reach Römerberg.  We were surprised how beautiful the markets backdrop was in the Römerberg square.  The market wasn’t open yet so we headed onward to the Archaeological Museum which not only had all the old cool stuff but a LEGO EXHIBITION!

Set in a church this is well worth the visit.  DO get the audio guide as no other languages are displayed other than German.  The audio guide is one of those hand held devices whereby you punch ion the number which is in front of the display you are looking at.  It took us around 1.5-2hrs at a leisurely pace.  Top Tip, ask for a locker….they are free and you can pop your belongings in there whilst you wander around.

In the afternoon and evening, we finally managed to visit the market.  This was superb!  It seemed to sprawl out from  Römerberg and each little street connecting seem to have a theme.  One little street was full of wooden toys, another had paper decorations and then there were candle stalls too.  Among these there were the food and drink stalls.  €5 bought you a typical Gluehwein.  Some places were charging a deposit for the tankard but there were places which were OK so long as you brought it back.  I went for the Apfelwein which was €2.5 for a smaller glass.  It was awesome!

Nearer the water front, there are some excellent craft stalls.  One stall sold some amazing paper stars which were 3D.  You could buy just the paper star or also including was the cord/flex.  The lady was really helpful and we got the one we wanted…..after to review several of them.

The sun was setting and one of the places i had read about was to visit the bridge.  So we headed there to watch the sun go down on a super-short city break.  It was really popular and many people leave a padlock on the bridge.  I did this is Gdansk but didn’t know they did it here.  DOH!  Next time I will do a little more homework.  As we came back down the steps there are flood markers…WOW there must have been some proper flooding going on back in history.

Sunday, well that came too quick and we headed back to the airport via the train.  €4.95 gets you a speedy train (10-12mins) directly into the airport terminal.  It really could be easier.  In fact, that is Frankfurt…it is easy.  I loved it.  No mess, no faffing around, everything worked etc. 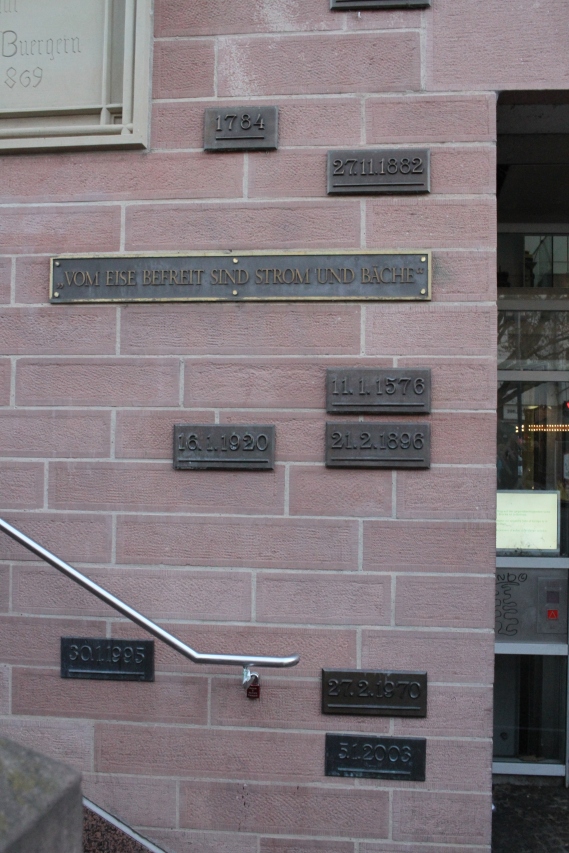 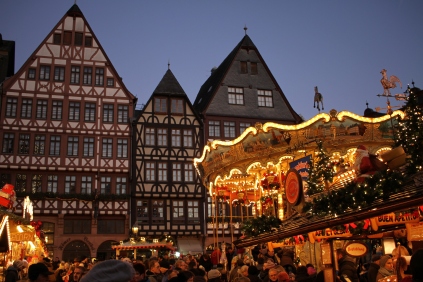 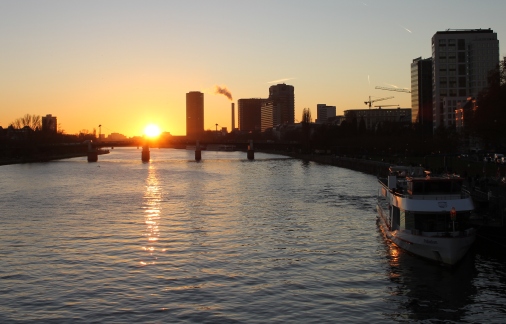