After a cracking little breakfast we headed to the airport to collect our car. We were expecting a Toyota RAV4 but after all the paperwork we could choose a couple of free upgrades. Ford F150 pick up, which was bigger than mini bus or a Nissan Rogue. We went for the latter which was a compact SUV.
Really nice car…. they’re all lined up so you just jump in and go.

[By now, I can hear you asking….Ant’s on holiday and so far he’s not had a moment. Don’t worry, I won’t let you down]

So looking at several Nissan’s parked up I went for the black shiny one. I pressed the boot latch and it’s one of those fancy power open/close tailgates. It was after Daws was banging on about the latch “being underneath!”… Alright alright alright hahahaha. It started to open and about 2seconds later it stopped and started to close. I mean it hadn’t even opened a few inches. So again I pressed it. At this point I was pretty fixated and dammed in getting this thing open, I didn’t actually hear Daws day “There’s someone in that car!”

After another couple of attempts the tailgate fully opened. I’d expected a big empty boot only to find a suitcase with a woman looking round at me from the driver’s seat.

Quick thinking me and being extremely British apologised prefusly to the lady. She was completely ok about it and I quickly shut the tailgate.
Obviously, partner in crime was already in stitches saying “didn’t you hear me”.
I didn’t hear a thing!!! hahahah. I just wanted the tailgate open. Bless the lady, she must had thought she was being car jacked before she’d driven out the parking lot at the car rental place. 🙂

Anyway, we finally picked another one, a grey one and finally headed our way on I25 south to Colorado Springs.

We stopped of at Citadel Mall which was like a mall from 2003 that had seen better days in years gone by and was struggling to stay afloat. I’m not knocking i loved it, it showed us real America. Any store you visited the customer service was exceptional. No one can do enough for you. For example, after having to queue for all of 10mins (and that’s not a lot for a British queue) they knocked $10 off the bill!!! Unheard of.

We finally reached our motel called Silver Saddle motel. Again, the goal of the hols is to experience real America..The swimming pool, that I was looking forward to was empty 😦
It does resemble something out of a horror film where the rooms on the ground floor and you can park your car out the front door.
I’m fully expecting to be in the next filming of
No Country For Old Men. 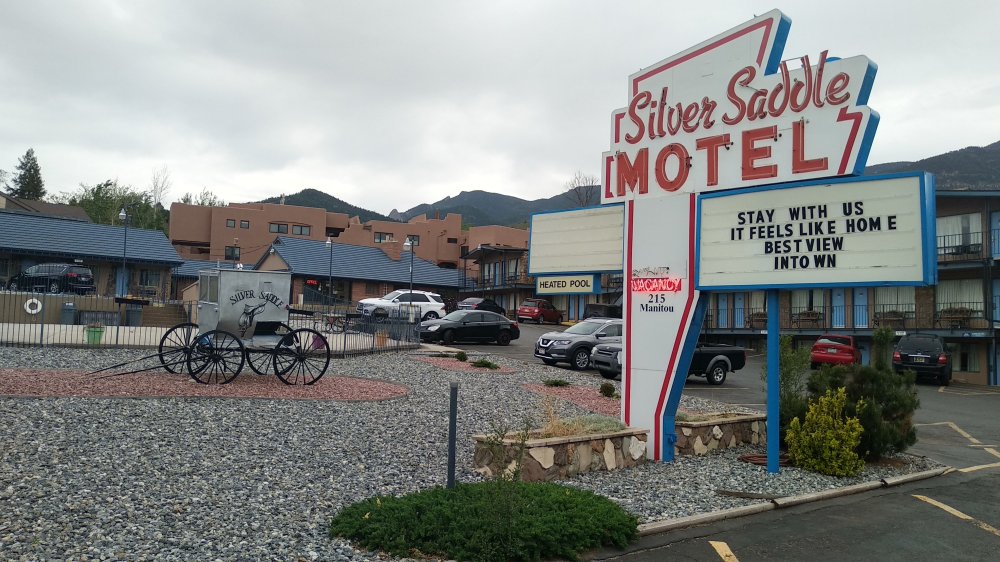