We set off from Foley and headed east to Pensacola, Florida. We’d been told there was a great Naval Air Force base to visit plus it was near our hotel we were going to be staying at [More on that later].

First stop was a graffiti bridge which I’d seen on Google. We pulled up to find a woman spraying a new piece of art which was great! This place really seemed to draw artists and reminded me of back home. 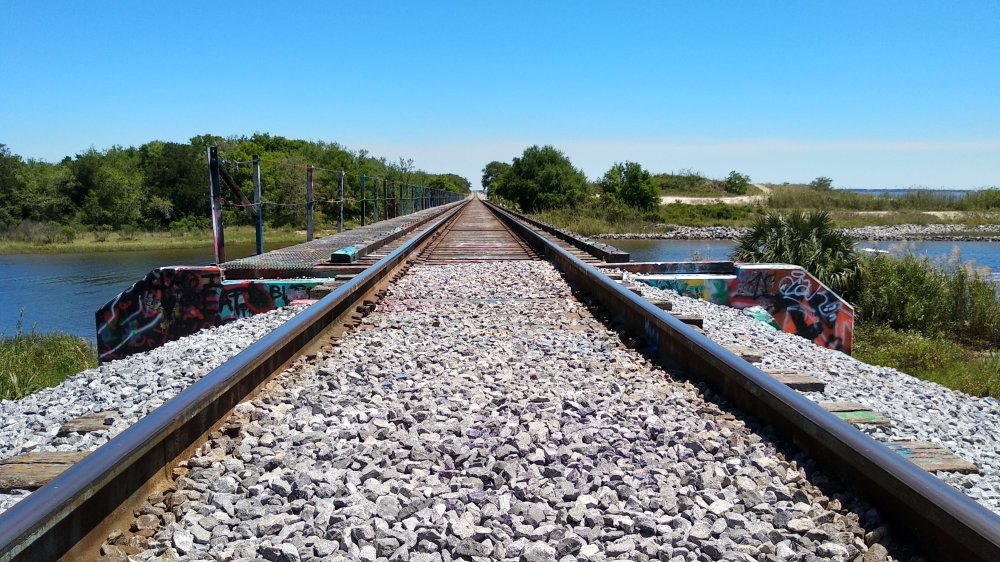 After few pictures, we set off again. Allowing Daws to handle directions is always a bit of a gamble. It wasn’t long before we were nearing the navy base in good time. We pulled up at the check point and stopped as commanded. It went a bit like this:

Big police man: Who are you here to see?

(Now, it’s at this point my senses tell me something isn’t quite right)

Me: (in my British accent) Oh, no one, we are here to see the museum.

Big police man: {big pause} please pull over to the side sir.

And I draw forward and pullover.

Big police man: Sorry, why are you here?

Me: We’veeeeeee come to see the planes?

Big police man: You can’t see those from this gate sir, you’ll need to turnaround, head out the way you came in, and take a right then another right. It’s just down the road.

It was at this point we had our passports handed back and we did a U-turn and made our escape. Like true Brits, we followed the directions as the Big police man had said. However, in America, ‘just down the road’ doesn’t mean what it does in the UK relating to distance. In fact, it was 20mins!!!! But we finally got to the base museum.

Inside, there were loads of great planes & helicopters based in a couple of huge hangers. There’s a IMAX style theatre too where we watched a 45mins show around D-Day. It was really good and recommend it.

We spent some good few hours at the Navy Museum and highly recommend it. To top it off, it is free but we did donate some dollars.

As we’d spent most of the day travelling and at the museum it was time for check in. Pensacola isn’t cheap on an Easter weekend but we’d found a reasonable place and had ok reviews….I probably didn’t read them as much as I should have. Golden Rule #1 Always, Always, read the bloody reviews.

We arrived and checked in. Our room was on the 3rd floor so when we got to the room door the cleaner popped her out out of the adjacent room saying it wasn’t ready. (Here we go).

We trudged back down to reception to explain what had happened and the guy switched us to another room on the 2nd floor. Again we made our way to the new room.

We had noticed something odd, so odd, it seemed crazy. The skirting boards had been pulled off the corridors and dumped at the end of each wing. To had alarm bells, there were NO carpets. They had been pulled up.

We arrived at our front door to be great with a horror. The smell was really bad. But as we’d not paid an awful lot we thought we could live with it. After 30mins we’d decided to venture out for dinner. It was at this point the ‘three strikes’ rule came into play. The door wouldn’t click shut from the outside. No matter how much you slammed the door/lifted handles etc it was no good. We couldn’t leave all out stuff in a place with a door that couldn’t lock.

That was it, we’d headed downstairs and handed back our key cards. We were gone.

Golden rule #2: What do you do in times of need? Eat chicken and be happy 🙂

We found another place for the night and that’s enough adventures for one day.